Another in our “Housing Styles of San Francisco” blog series.

Did you happen to catch “The Gilded Age” on HBO earlier this year? It is a lavish new TV series set in New York in the final decades of the 19th century and featuring much marble, many digs about new money, and real historical characters combined with fictional creations, you might wonder at its similarity to certain of Edith Wharton’s novels. The truth is that it was the Pulitzer-prize-winning Wharton—and most particularly The Custom of the Country, her novel about a ruthless social climber—who inspired Fellowes to be a writer. But Wharton’s first book, co-written with Ogden Codman, the architect she employed to work with her on her house in Newport, Rhode Island, was a treatise on decorating houses, entitled, simply, The Decoration of Houses. An ode to nobility, grace and timelessness, her ideas about proportion and simplicity are still the bedrock of any scheme, and the book has been described as the equivalent of the King James version of the Bible. It also is the go-to style book for all things regarding Edwardian-style design.

What Exactly Is Edwardian Design?

This is the style from 1901 to 1914 when World War I was just about to begin. Although, some of it began a few years before King Edward rose to the throne. This era is also referred to as The Beautiful Era and the Gilded Age. It was a hedonistic time and the style was inspired by Britain’s King Edward VII.

This was a time when at least the rich started gaining access to technology and electricity. The aeroplane was being considered one of the great advances in transportation and Britain wielded a considerable amount of political power. As it is with everything, fashion was also influenced by the style of the monarch. Hence, the world was beginning to move away from a much conservative society under Queen Victoria to a lot more lax King Edward. 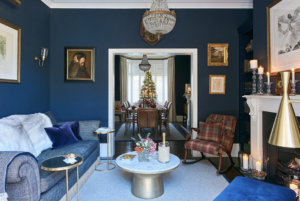 In terms of design, people started to get rid of dark and heavily patterned furnishings and started to opt for cleaner patterns and relatively neutral color schemes. Floral prints and other decorations were inspired by nature. Motifs were introduced as a trademark of the Edwardian era. Tiles and embossings were starting to find their way into designs along with stained glass and dark wooden furniture.

Bamboo and wicker were starting to gain a lot of popularity. Ornate fireplaces were starting to be a thing in rich households. Even in the kitchen, solid wooden islands were being used. Now, some of this path-breaking work was done by figures like Charles Rennie Mackintosh along with Margaret (his wife) and Frances McDonald (Margaret’s sister). Mackintosh did a lot of this work in collaboration with his colleague Herbert MacNair. Together, they highlighted the work done by Scottish designers in Glasgow. Some of the best glass work on lamps and windows was done by Louis Comfort Tiffany who was the son of Charles Lewis Tiffany, the jewelry trader who founded Tiffany & Co.

If you want to choose the Edwardian design style, there are a few basics that will not change. We will go into a lot more detail in a bit but remember that this era was about replacing carpets with polished floors and rugs. Oriental themes were introduced and places with a lot of footfall, like the kitchen, often featured red tiles. Pastel colors and schemes were popular. Floral designs inspired by nature were courted. As a result, primrose, leafy greens and lilacs were in high demand. This was also a time when wallpapers were introduced making the space feel light and airy.

The Change in Furniture

Art Nouveau style of furniture is a big part of Edwardian furniture. This style is characterized by long and organic lines. It was used in architecture, jewelry and illustrations as much as it was used in interior design. 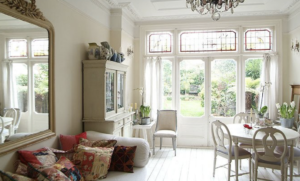 Since a lot of these items were mass produced, it was easy for the Edwardian style to replace Victorian models quickly. In fact, even today they are produced in abundance since many choose to recreate that look. You can find them in wing chairs and wicker furniture which will also tell you that it is a pretty affordable style.

Those Floors and Rugs

The Edwardian era marked the beginning of dark, polished floors and Persian rugs. Wooden floors of this kind are a classic attribute of the Edwardian style of design. They were high in quality and the luxurious rugs were used to soften the look. So, they were found in living rooms and halls.

Then Come the Walls and Wallpapers

The Edwardian era welcomes light wallpapers with open arms. This is also a reflection of the Art Nouveau style. It features a lot of floral designs and motifs. These elements were incorporated into wallpapers even if a lot of them were muted patterns in the main rooms and soft florals in the bedroom. 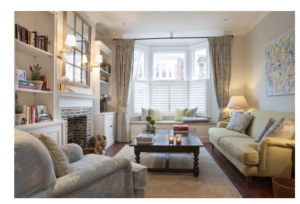 With homeowners moving away from industrial cities, they also moved away from that style of design and preferred white walls in light and understated patterns. The air wasn’t sooty like in the industrial spaces and so they weren’t worried that their white walls would get dirty. Access to electricity was another turning point in the design world. They got rid of candles and their smoke which also helped protect the white walls and floral wallpapers.

The Use of Lighting

Speaking of lighting, while some of the middle class still did not get proper access to electric lighting, the larger estates definitely had it. And so, they used it in combination with a variety of lampshades and period shades. Tassels and soft fabric surrounds started to become a thing. This was also when Tiffany lamps and large ceiling lights started to become popular. In fact, a lot of it was not just for lighting but also for decorative purposes. The affluent found glass-etched shades to be very fashionable.

This is one of the big changes from the Victorian to the Edwardian era. The dark colors of the former began to go away and pastel colors with their light and fresh approach began to take the centerstage. Patterns that are typically associated with femininity were being favored. Blues, lilacs and greens were dominating the scene along with yellows and grays. Fresh flowers were being used in arrangements. The fabrics got darker and matched well with the creamy walls. Doors and ceilings were in lighter colors too. Dining rooms were rich with red, yellow and gold colors. Hallways were in green, blue and dark gold combinations.

While this design is about toning it down from the Victorian scene, it still had love for knickknacks. The way this is executed is by using key pieces well. For example, certain sets of Edwardian China sets are recommended especially for display purposes. It is considered elegant and an ornamental display. Old gramophones, cake stands and silver frames are all part of the Edwardian charm. It is also cheaper and less cluttered when compared to Victorian decorative elements. It gives the home a period look without taking over all the space.

How to Get a Piece of It for Yourself

Now, this might seem like it was a long time ago (I mean, this is from before World War I) but in a way, this was the first step towards our transition into a lighter and softer interior setting. And there is a reason why it is popular even today. It oozes elegance, style and taste without causing clutter or burning a hole in your pocket. Every once in a while you will spot an element that will cause nostalgia and bring a smile on your face. Isn’t that a great setup for your home? And unlike the Victorian style, this one is easy to recreate and even mix up a bit with modern artifacts. You can start that with stained glass and tiles. These are elements that also blend well with modern designs.

While you don’t necessarily need an Edwardian exterior to introduce elements of the style to your interior spaces, it would certainly complete the look. Browse Edwardian homes for sale in San Francisco to buy your own, or just to get some inspiration. 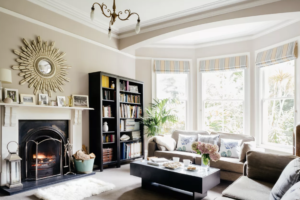 Several floral and Art Nouveau designs have also found their way into the 20th century making it slightly closer to modern than the original Edwardian designs. If you want to make the house look more modern than Edwardian, try a monochrome color scheme for the stained glass.  This is a great look, especially in bathrooms.

Indoor plants are also one way to introduce Edwardian style of design to your home. They will do a good job of complementing the pale blue and green color scheme of the walls. Speaking of walls, a collection of framed photographs in black or silver frames is a great choice for those pastel walls. It is also a great idea for smaller rooms. If you like curtains, long and flowing pieces of cloth in neutral tones will make the room look airy and full of light.

In short, if you are looking for a cheat sheet to make your house look Edwardian, here is all you need. You need to make space for light to come in. Think in terms of symmetrical but clean lines. Keep the color palette soft with a lot of olive greens, sage greens, mustard, pale blues, pale deep pinks, lilac and violet. If you want to use darker colors, reserve them for elements like curtains which will pair with the lighter walls. Also, your living room can be slightly darker than the other rooms. It’s never the other way round.

Keep the furniture limited to bamboo, wicker and mahogany. A wing chair will look good in the mix. Floral wallpapers with roses and bright flowers are a big thumbs up. Accessorize with photo frames, needlepoint cushions and conical shell gramophones. Pick a couple of nice pieces of art and remember that this is stuff you will look at every day. So in the end, follow your heart.

Find the best choice of Edwardian, Victorian, and other homes for sale.