15 Minutes With the Mayor’s Director of Housing Production 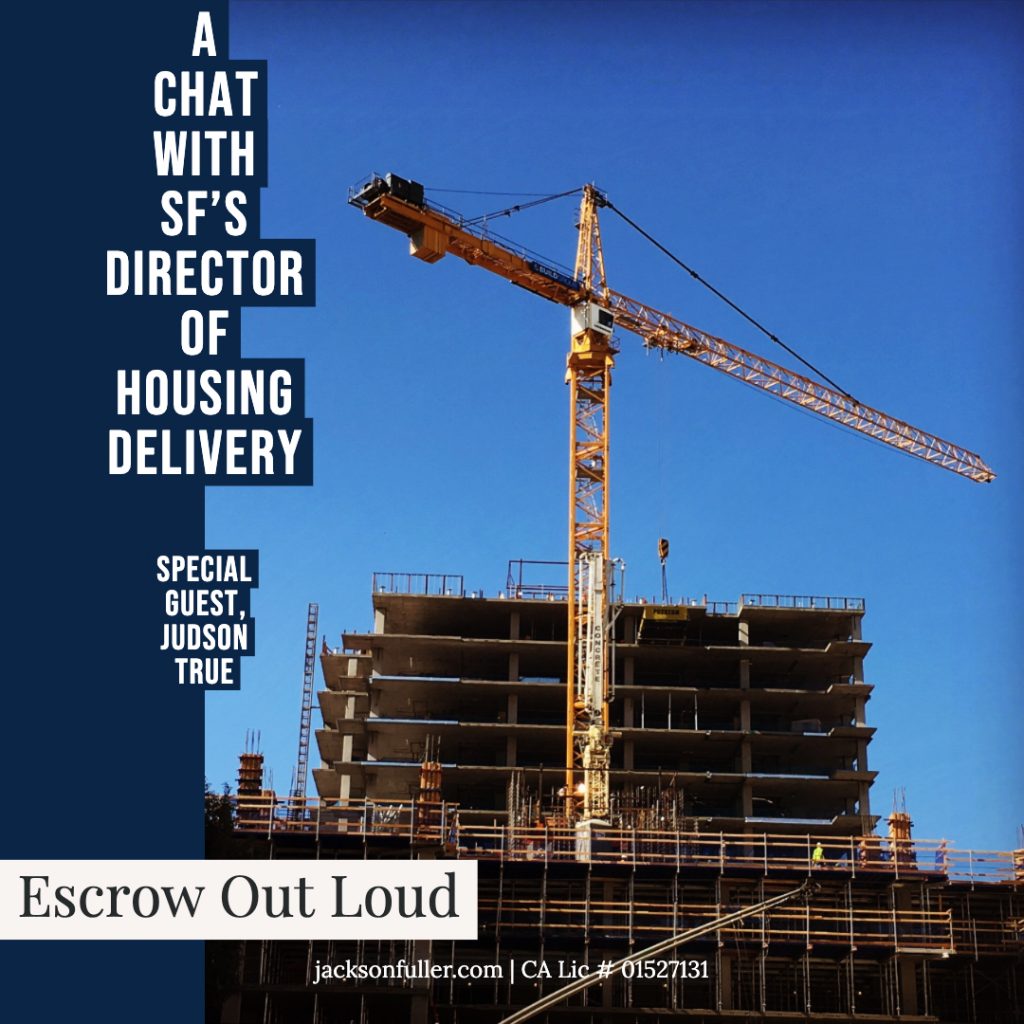 In today’s episode of Escrow Out Loud we are on location at City Hall meeting with the Mayor’s Director of Housing Delivery – Judson True.

[00:23] Due to the current housing crisis in San Francisco, Mayor Breed has set a goal of creating at least 5,000 new homes a year; with roughly a third of this being affordable housing. It is a lofty and crucial goal she has tasked Judson True with achieving. Judson True has an impressive background and is the first person to be appointed to this newly created position. What, exactly, is his job? [03:16] Currently, in SF there are 56,000 homes that have been approved by planning but are yet to be built. The vast majority are part of large new neighborhood projects which will transform the city. Projects like The Shipyard, Park Merced and Treasure Island. Dogpatch projects include Pier 70 and the Potrero Power Plant while Mission Rock is in Mission Bay. [05:01] Judson is working on a lot of large projects and loves them all equally. But a little more equal than the others are the waterfront projects which he is particularly excited about. It is great to see some projects moving along really quickly. Because really, the hard part (and the part that takes the longest) when building new neighborhoods, is getting all the infrastructure permitted (our favorite new phrase: “horizontal infrastructure”). [06:59] Most of us realize that there is a real need for affordable housing in the city. How does funding for affordable housing work though? As you might imagine, it is complicated. Judson sheds light on how the funding for affordable housing and the building of market rate housing correlate, and where funds for affordable housing come from. [10:00] Judson is from the mid-west originally, but an opportunity at Berkeley led him to SF, where he lived in the same apartment in Hayes Valley since 1998! Hayes Valley is one of the neighborhoods that has been radically transformed over the years. [13:12] This year there are a lot of housing bills in the state legislature. Which in particular does Judson believe will have the most positive impact on housing in SF? [15:15] Finally, what are Judson’s thoughts on the CASA Compact and its impact on the housing debate so far?

Thank you for listening. If you enjoyed this episode leave us a review on your favorite platform, tell your friends and don’t forget to join us again next week!