Pride Weekend here in SF starts NOW. Here are some things you might not know about Pride; great facts to chat about at all the Pride festivities you will be going to…

Pride Month Started as a Riot

Pride month started as a riot against police brutality at a small dive bar in New York City called the Stonewall Inn. At the time there existed outdated “masquerade” or “cross-dressing” laws that suggested a “man” or a “woman” must be wearing a certain number of clothing items that matched the gender on their state-issued ID. The police took advantage of these laws to raid drinking establishments and arrest transgender and gender non-conforming individuals. Just after midnight on June 28, 1969, the police raided the Stonewall Inn like they had many times before. Only, this time, something unusual happened: Stonewall patrons fought back. Drag queens formed a kickline to fend off the advancing police shouting, “We are the Stonewall girls! We wear out hair in curls.”

So always remember, Pride began as a violent uprising and has changed massively since then. 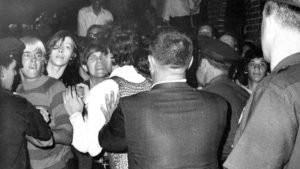 There Is More Than One Type Of Pride Flag

With recent Pride Months conducted virtually, the summer of 2022 will likely see a wealth of in-person Pride parades and events (Pride Month officially occurs in June, but different cities have celebrations during different months). As such, you’ll likely see a lot of different Pride flags that embody different aspects of the LGBTQ+ community this year and in future years, including many Flying outside the homes of many San Francisco homes, houses, condos and apartments.

There are many more iterations of Pride flags that exist, including flags from different countries and states; flags that include relevant symbols; and two or more flags combined into one. There’s also some disagreement about what should be considered the “official” flags, and controversy about some of the flags’ origins and meaning. But what’s powerful is that the breadth of LGBTQ+ representation continues to evolve, a nod to the diversity of sex, sexuality, attraction, and gender.

How many of these flags do you recognize? 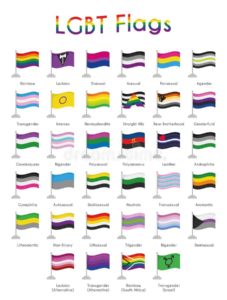 We Have Our Own Cultural District here in San Francisco

The Leather and LGBTQ Cultural District is a cultural district in San Francisco’s South of Market (SOMA) neighborhood commemorating the history and culture of the leather subculture active in the area for approximately half a century. The San Francisco Board of Supervisors established the district with legislation signed into law by the mayor on May 9, 2018. A ribbon-cutting was held on June 12 that year outside the Stud on 9th St. for that.

The area is bounded approximately by Howard St. on the northwest, 7th St. on the northeast, I-80 on the east, and US 101 on the south. There is also an exclave between 5th and 6th streets, Harrison and Bryant. It includes the San Francisco South of Market Leather History Alley, which opened in 2017. The aim of the district is to “honor and commemorate the people, places, and institutions that gave South of Market its distinctive culture and appeal, and would also help protect the remaining businesses and spaces, and sustain the people who live, work and recreate there.”

Want to live in the middle of the Cultural District? You can! Visit us here. https://jacksonfuller.com/buildings/soma-yerba-buena/ 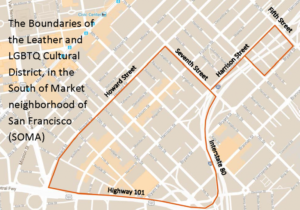 While transgender activists played significant roles in the Stonewall uprising, there still wasn’t a defined and singular place for the transgender community to celebrate their identities. In many instances, those within the community faced discrimination even amongst the LGBTQ+ community. The first march reportedly came about after a mysterious email was sent to community activists in San Francisco. According to Trans March, the email read, “We are calling for this march to demonstrate that we are a significant and growing portion of the LGBTQ community; to increase our visibility and presence in the TGIQLB community and the overall community at large.” The anonymous message also encouraged the transgender community to build a connection with one another while speaking against hate, violence, and oppression.

After receiving the message, many activists came together to organize the event. Many local businesses and organizations also chipped in to help make the event a reality. A few hundred people came together on June 25, 2004, and gathered in Dolores Park to begin the demonstration. Since the first transgender march, the number of attendees has continued to grow, with thousands participating in it annually on the Friday of San Francisco Pride weekend. The event also sparked annual marches, gatherings, and demonstrations worldwide to raise awareness and support for transgender issues. However you celebrate, do so safely, and HAPPY PRIDE!