The tragic fire in San Bruno last week has unleashed an avalanche of stories about PG&E and their complicity in events that lead to the destruction of a neighborhood and the deaths of too many individuals.

The folks at the SF Gate real estate blog “on the block” had an interesting article about the National Pipeline Mapping System, which offers a piss-poor (IMHO) program for trying to determine if your home (or prospective home) is near a major gas transmission pipeline.Unfortunately, they only allow you to zoom in to a 1:24,000 scale, anything closer than that and the pipes disappear from the map. You can access it yourself from this link.

My search created the following map, which doesn’t seem to show any major transmission lines on the west or north side of the city.

This map is more detailed than the one at the “on the block” blog, but their map does seem to indicate that somewhere on the west and north sides of the city there are major transmission lines. Their map is from the state of California, but it is a bit depressing to think that the national resource for this misses such major lines in San Francisco. 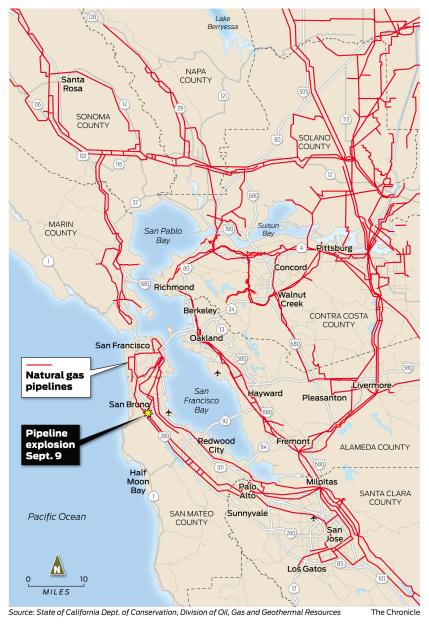 And the news also just seems to get worse for PG&E, with allegations that they asked for and received aÂ  $5 million rate increase to replace the pipe that exploded, they never actually did the work.

The request came as a consumer watchdog group said pipeline owner Pacific Gas & Electric had planned in 2009 to replace a section of its gas pipeline just a couple of miles from the section that exploded, but never spent the $5 million in rate increases to do the work.

TURN [The Utility Reform Network] also said the utility asked for another $5 million for the same project in 2009 — the year it should have completed the work it hasn’t even started — saying it wouldn’t be completed until 2013.

“You can’t track the dollars one by one, but we do know they spent $62 million more on management incentive business than they had forecast in 2009,” he said. “They spent $60 million on going back and re-doing gas leak surveys that they had botched elsewhere on their system.”

PG&E responded that it “is committed to performing the work necessary to assure the safety of its gas transmission system.”

The utility said it had identified the line section as a “high priority project” in the earlier transmission rate filing, but “rescheduled the project” after an updated assessment in 2009. But the company did not explain why it needed an additional $5 million and three years to complete repairs on a section it said, in its most recent rate filing, was in the top 100 risks for failure.

“Coupled with the consequences of failure of this section of pipeline, the likelihood of a failure makes the risk of a failure at this location unacceptably high,” the company said in that filing.