Ask anyone to describe what makes San Francisco extraordinary, and Victorian architecture would land near the top of the list, somewhere between Alcatraz and VC money. (This is also a good time for this point of clarification: Victorian refers to a period, not a style. To call a building “a Victorian” means it was designed during Queen Victoria’s reign from 1837 to 1901.)

San Francisco was one of the first U.S. cities to take Victorian architecture and run with it. Developers created Victorian homes in the South Park section of the city back in the 1850s. They designed them to look like row homes in London. The gingerbread-house details are a more American addition, where no surface was left untouched. The style was super popular for large summer houses and later adapted for the urban row house and workers’ cottages like those in Glen Park and Potrero. Some of the key features of Victorian homes:

Rob Thomson, president of the Victorian Alliance of San Francisco, the city’s oldest all-volunteer nonprofit dedicated to the restoration and preservation of historically significant structures, estimated that only 13,000 to 15,000 of the city’s original stock of 50,000 Victorian buildings remain, most of them residences. 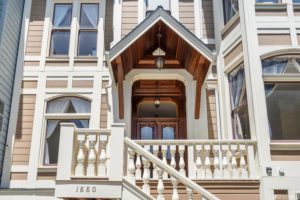 “The houses are located in all the city’s neighborhoods,” he said, adding that the alliance’s annual autumn house tour typically attracts 500 to 1,200 people. “But some of the most spectacular concentrations are in Alamo Square, the Mission District, and Noe Valley.”

Today, the remaining homes are under the protection of vigorous historical preservation rules. Everything from the choice of exterior paint colors to indoor kitchen pulls and knobs all have strong guidance from the Victorian preservation societies. They are also some of the most sought-after homes in the Bay Area.

If you love Victorian Home styles, we’ve made it easy to find one in San Francisco for sale! Browse listings of Victorian-style homes in the bay area now!